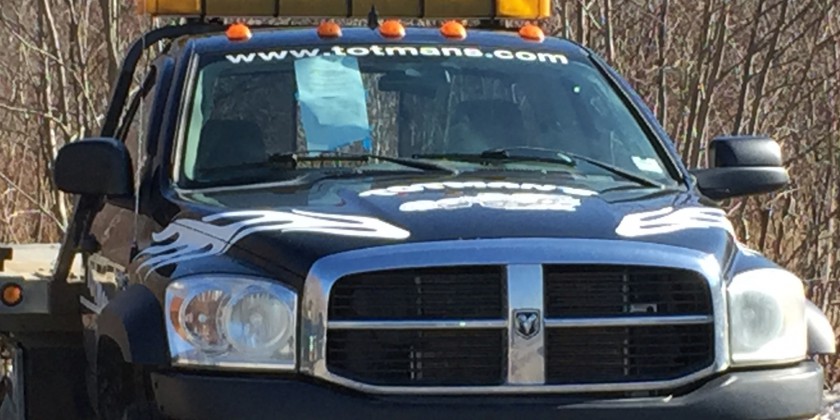 This is a detailing of the buyback process that we dealt with recently so that others will have a heads up should they have to contend with a big company buyback of any kind. No big surprise here:  you are a number – a VIN number to be exact. To be fair, others’ experiences may be different, but this is a synopsis of ours.

When we bought the truck in 2011, we were ecstatic. It was an exciting day. It was a 4wd flatbed and would allow us to do calls in places we had previously had to call in others to assist, or get stuck trying to do it ourselves. Mind you, we’ve been creative and mostly managed, but this was a cool tool to have!

It soon became apparent that it had front end issues. At 4,000 miles + / – we had to replace the brand new tires. The truck never drove exactly right (we picked it up at 134 miles), so we contacted the dealer we purchased it from since the vehicle and tires were so low mileage. They couldn’t do anything for us they said, so referred us to Dodge. After many telephone calls, we finally reached someone who agreed that it was a factory problem with the alignment, so they offered to pay for the tires and alignment (first time only), but we had to pay to have them mounted and balanced.  Of course, you can’t get a truck that size aligned locally, so we traveled to have it done. It took Chrysler/Dodge several days to find anyone who could handle aligning that truck. Ok. So far, so good. At least we got them to pay for the tires and alignment, right?  Onward…

Over the 6 years we owned the truck, and through all the miles, we had continuous problems with the front end handling with no resolution. After talking to others who owned similar trucks, we reasoned that it was simply the way they handled. Frustrating as it might be, we did not believe it was unsafe; it was just the way the truck handled. Different trucks handle differently. We’ve had many and they’re ALL different.

Recall notices received prompted us to call the dealer, and the truck was delivered for a warranty seat replacement (seat fell apart in about 25k miles or so), at which time any recalls were supposed to be performed, but according to Dodge in 2015, nothing was ever completed. Upon further research, it appears that most dealers didn’t even HAVE the parts to DO a recall repair when we sent it in. Regardless, we were not told that it wasn’t done, so assumed it was.

to the notice we get that Dodge has been ordered to buy back hundreds of thousands of this model truck. Was ours one of those trucks that were a problem? Was more damage caused due to this and thus, why the truck handled so badly? Was it unsafe? All questions that we were asking. This was  early August, 2015.

The first letter indicated we should make contact with a Dodge dealer ASAP to assess the VIN, which we did. Total confusion ensued – no one knew how to check which vehicles were affected and some had not even heard of the buyback.  We checked with several dealers. No one had a clue. We decided to wait a little bit and called back. It took about a month before anyone had a clue how to even look up the affected VINs at the dealership. Finally, in mid September, it was confirmed by phone that ours was eligible for the buyback because the repairs had never been completed properly despite going to the dealer.

We were told that although it was eligible, it would be a couple of weeks before the process began, so we waited, contacted them in about 2 weeks and was told to go to a website to check the VIN again and then we had to make a formal request for the buyback (by phone).  Did all of that in mid-October.

We waited through November, and in late December, we contacted Dodge to see what the holdup was. It seems that when you are a commercial customer, the process is a bit different.  We were told to “hang in there” and someone would be back to us shortly. A few weeks later, we contacted Dodge again, and were told someone would be in touch to come “inspect” the vehicle, to ensure it really was compliant with the buyback. We received a call about 3 weeks into January from a gentleman who said he would be up “on Monday” to meet us at the dealership to look at the truck. No one ever showed up. We put in a rather frustrated call to Dodge again, at which point someone was sent up a couple of days later, took a few pictures, did NOT inspect the vehicle in any way and went on his way. An important point to make is to be absolutely SURE to give accurate  mileage and indicate any previous damage to the truck, as it will come back to bite you later on if you mislead or omit in any way. We gave them a detailed accounting of all items that were either damaged and/or missing, plus accurate mileage before they ever showed up, so it was not an issue for us, but it has been for some that either were never asked those questions or they weren’t completely forthcoming.

At this point, we’re glad that at least things seem to be progressing since they’ve now at least looked at the truck. They tell us we should not be driving it. Initially we thought they were saying it was because it was unsafe, but after speaking with them, it was because we might add miles to it. (Are they planning on reselling it???) Probably. From what I have been able to glean from researching it, there is nothing preventing them from reselling it, if they replace what caused the initial recall.

A week or so after the pictures were taken (I hesitate to call it an inspection since he only took pictures), we get an “offer” to buy it back. READ IT CAREFULLY. You have 5 DAYS ONLY to respond. If you miss the email, it’s the only offer they make and it’s delivered ONLY by email, according to the representative I spoke to.  (NOTE: Since writing this I have conversed with a couple of people online who had a couple of different offers, with the second offer being LESS than the first one, and both of those were verbal and non-commercial.) Once again, the reps are all over the place, with no one really understanding how the process works, apparently including those who are implementing it.  My advice, to protect yourself, is that once they have looked at your vehicle, give it only 3 or 4 days, then contact them to see if the offer has been emailed to ensure you have not missed it. Our offer was fair market value based upon our own research + 10%, so we were good there. No issues with the offer itself.

We submitted the paperwork, copy of the title, bank info, etc, within the 5 day window. Heard nothing – not an email, not a phone call – nothing. 2 weeks went by, 3 weeks went by, finally we called in to see what the status was, and also to ensure they actually received the supporting documents we sent. “We have requested a check and that takes a few weeks.”  OK, a two-second email would have been sufficient, but beyond that inspection and offer, you likely will hear NOTHING until someone contacts you to pick up the vehicle, at which point you probably have one to a few days to get the truck ready and coordinate meeting with them at a local Dodge dealer, if you have one; otherwise you’ll have to travel. This because they actually leave the truck there for transport at some future date.

When they ultimately decide it’s time to come meet with you, be prepared for a more in-depth inspection of the vehicle this time, with clear attempts to knock down what they previously offered by stating that we had not disclosed a minor damage (which was evident in the pictures they took + previously disclosed), potentially putting off the buyback to renegotiate. Matt declined to negotiate, indicating they could look at the pictures previously taken which clearly showed the truck’s full condition, so was detained while the rep contacted Dodge for an “approval”.  Stand your ground as long a you know you disclosed everything you’re good.  Matt stood his ground and they didn’t argue once it was clear he wasn’t going to dicker or yield. I believe it’s their job to try to find reasons to discount more, but don’t let them – as long as you gave full disclosure. After beginning the official process in early October, the truck was turned over February 26, 2016.

FINE PRINT: THE KICKER is that if you have any outstanding loans on your vehicle, they DEDUCT the future interest from your check from the date of pickup out nearly 4  MONTHS, which is their “window for payment”, so they’ll take the per diem interest on the loan, multiply it by several months, and deduct it from what they give you. You eat the interest for however long it takes them to cut the check to the bank, which according to them can take 3-4 months. PLUS, particularly if you have a loan, YOU are also responsible to continue to fully insure it until it’s actually paid off, as you are ultimately liable for any damage occurring to it while it sits at the dealership prior to payoff awaiting shipping. For a commercial truck owner, this can amount to hundreds of dollars per month. IF they pay it off more quickly, they will give the difference in the interest back, but the insurance you’re out. The deduction of the lengthy per diem interest calculation and responsibility for the truck while waiting for potentially several months to a payoff was left entirely out of the agreement we signed.

Note for a personal truck owner – it could seriously affect your credit to have them take 3 or 4 months to pay the vehicle off, as the bank will continue to show your payments as delinquent, so something to be aware of and discuss with them during the process. As a commercial truck owner, this was not as significant an issue.

In summary, expect to have a LOT of patience, a LONG WAIT while you may be told not to drive the vehicle, but must continue to pay for it and insure it,  some disconcertingly serious disorganization during the process, plus a rather shady process at delivery. In the end, you are not making out, but  breaking even and/or cutting your losses. It is definitely a process we would not want to repeat.

Some additional information on the buyback process and others’ experiences:

Article:  How to Get the Most From Your FCA Buyback (Note that our commercial truck did NOT render a “preliminary” estimated amount – I believe that initial estimate is limited to personal vehicles)

Where to find additional information:

Information about a vehicle’s eligibility may be determined by inputting its Vehicle Identification Number (VIN) into the search engines at any of the following sites:

If its status is “open,” it is unremedied and therefore eligible.

Owners of the following vehicles are eligible for the buyback program as long as they have not already had their vehicle repaired to address the recalls:

Specials are specific and limited to availability. Once the coupons are gone, they’re gone. We…